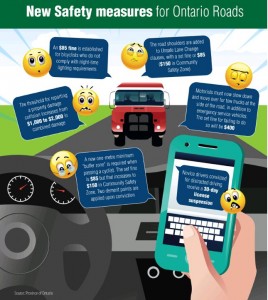 These changes are part of Bill 31, commonly referred to as the Making Ontario’s Roads Safer Act.    Changes include tougher penalties for distracted driving, new rules to protect cyclists and measures to ensure the safety of tow truck drivers and children riding school buses.

Since 2009, more than 500 people have died in collisions , in which driver inattention was a causal factor.   Distracted driving has exceeded impaired driving as a causal factor in fatal collisions. More changes to Ontario’s traffic laws are planned for 2016, including:

Getting you the coverage you deserve